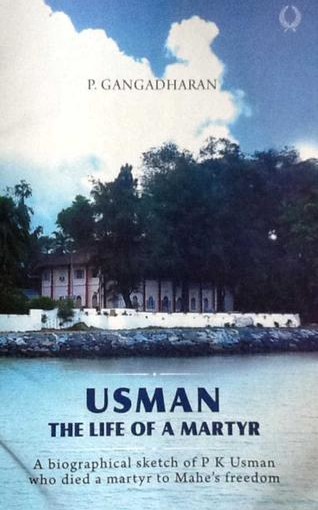 Reflections on Usman: The Life of a Martyr by P. Gangadharan.

Unlike in many vibrant democracies, political biographies are not yet a forte in Indian literature. Except in the case of Gandhiji- good, detailed and objective biographies of Indian political figures are seldom available. The hegemony of freedom movement against British in Indian historical writings, almost always overshadow, equally intense and emotional histories of freedom movements against other colonial masters who ruled many parts of India, including freedom movement against French. Just as an example, there is no good biography of I K Kumaran Master (who was fulcrum point of people’s movement against colonial rule of French in the town of Mahe), yet available. It is against this backdrop, the Usman: The Life of a Martyr by P Gangadharan comes as a solace to this reader who wants to understand and connect with history of the village and town he grew up.

P K Usman (8th September 1924 – 23rd March 1958) was a freedom fighter, social worker who died at the age of 34 due to harsh punishments he received from French rulers of Mahe. The book under review is a small, but detailed biography of P K Usman (Master). Written by a retired lecturer in English, P Gangadharan, this book, subtitled as “A biographical sketch of P K Usman who died a martyr to Mahe’s freedom”, is welcome addition to scarce political biographies in non-British history of Indian independence movement and is gift to Mahe’s younger generation.

There is an extract from a letter that Usman Master wrote to his political mentor Mangalat Raghavan added as an appendix to this book. I started reading the book at the appendix and it was a serendipitously right decision to do so. It’s a direct window into the mind of PK Usman. In between the lines of that empathically written mail, you will clearly see a man of deep curiosity with unquenchable thirst for knowledge. You will meet a man who is aware of his limitations, yet willing to do what he can and a man who seeks social enlightenment. You will see, above all. a decent human being who loves books, Hindi and socialist ideals, who is thinking of his friends even though he is behind bars, and at the same time being well aware of cleverness of his own captors. It is this decency of PK Usman, rarely found nowadays in politicians, towards his people and his place that author captures through the rest of the 114 or so pages by interweaving the history of Mahe’s independent movement with personal history of Usman Master. The book is published by Olive Books and partially supported by PK Usman Memorial Trust, Chalakkara.

The book has couple of structural deficiencies, when compared to similar political biographies of freedom fighters published in India and abroad. But what is lacking in structural comprehensiveness, author well compensates by bringing out into these pages sense of immediacy and deep feeling of emotional connection that he has with subject of his book.